The Jagannath Temple in Puri is a famous Hindu temple dedicated to Jagannath and located in the coastal town of Puri in the state of Odisha, India.The name Jagannath (Lord of the Universe) is a combination of the Sanskrit words Jagat (Universe) and Nath (Lord).This temple was built in the 11th century by King Anantavarman Chodaganga Deva.

The temple is an important pilgrimage destination for many Hindu traditions, particularly worshippers of Krishna and Vishnu, and part of the Char Dham pilgrimages that a Hindu is expected to make in one's lifetime.It is one of the holiest Hindu Char Dham (four divine sites) sites comprising Rameswaram, Badrinath, Puri and Dwarka.It is said and believed that He takes His bath at Rameswaram, meditates at Badrinath, dines at Puri and retires at Dwarika. It is therefore, a lot of importance is given to the temple food "Mahaprasad" (not simply prasad) here at Puri.

The temple's kitchen is considered as the largest kitchen in the world.Tradition maintains that all food cooked in the temple kitchens are supervised by the Goddess Mahalakshmi, the empress of Srimandir herself.where about four hundred Supakars(cooks) work on two hundred hearths to feed about ten thousand mouths every day.One of the traditional and Popular is the Mahaprasad (Avada)- the holy food served to Lord Jagannath as bhog.The specialty of ‘mahaprasad’ preparation lies in its massive cooking by unique steaming process in earthen pots, kept on above the other.Mahaprasad  is the term applied to the 56 food items(chhapan bhog) offered to Lord Jagannath.

The main 56 items of CHHAPANA BHOGA/ MAHAPRASAD are-

34-Kheeri-Milk,Sugar with Rice
35-Papudi-Prepared from only the cream of milk
36-Khua-Prepared out of Pure Milk slowly boiled over many hours to a soft custard like consistency
37-Rasabali-Made of Milk, Sugar and Cheese
38-Tadia-Made of fresh cheese
39-Chhena Poda-Made of fresh Cheese, milk and sugarse, sugar and Ghee
40-Chhena Khira-Milk,Cheese,sugar and ghee
41-Malpua-Made of milk,wheat,sugar and Ghee
42-Sarapulli-It is the most famous and most difficult milk dish to prepare.It is made of pure milk boiled slowly for hours and spread in to a large pizza shaped pan.

43-Meetha Dali-Sweet Lentil
44-Biri dali-Black gram Lentil
45-Chana Dali-Chickpeas Lentil
46-Muga Dali-Green Gram Lentil
47-Dalama-This is one of the typical dishes in Oriya Home. It is a combination of Lentil and Vegetable. Usually eggplant,beans,sweet potato and tomatoes, although tomatoes are not used in Temple preparations. Coconuts and a dried root of vegetables known as Badhi which looks like a mushroom and is high in protein are added.
48-Mahura-Mixed vegetables
49-Besara-Mixed vegetables with black mustard seeds
50-Saga–A spinch dish
51-Potala Rasa-Pointed gourd and potato cooked with coconut milk
52-Goti Baigana-small eggplants with a shredded coconut sauce
53-Khata-a sour side dish of cooked mango or apple, mango and grape cooked together
54-Raita–A yogurt like dish with cucumber and radish.
55-Pitta-Fried neem flowers
56-Baigani Bhaja-Fried Eggplant
Pana-A sweet curd drink 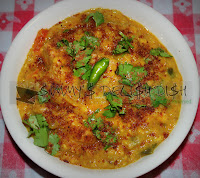 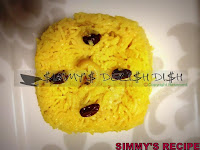 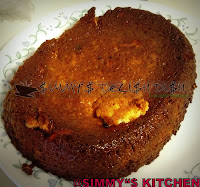 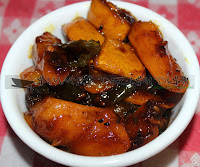 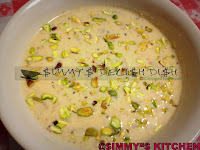 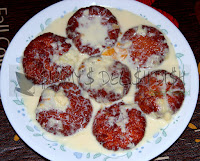 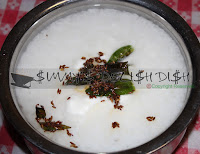