- August 20, 2013
Raksha Bandhan  is a in India which celebrates the relationship between brothers and sisters.It is also called Rakhi Purnima.The festival is marked by the tying of a rakhi or holy thread,which comes in many colors and designs,by the sister on the wrist of her brother.The brother in return offers a gift to his sister.The brother usually presents his sister with an envelope filled with money,though other presents such as saris and clothing can be given. The brother and sister traditionally feed one another sweets.These sweets include anything from Jalebi,Rasgolla,Gulab Jamun,Kaju Katli,Peda,Kalakand,Sandesh,Ladoos and Burfi. 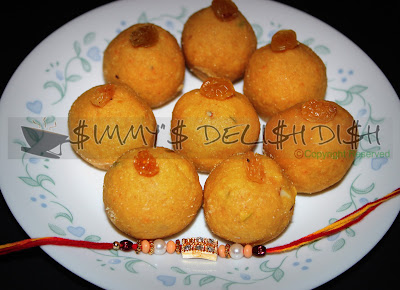 Presenting here a recipe associated with this festival,the "Besan Ladoo".Besan ladoo is a traditional Indian sweet or laddu recipe of roasted and Bengal gram flour or besan mixed with ghee,sugar,cardamom powder and nuts.It is very famous in north India. 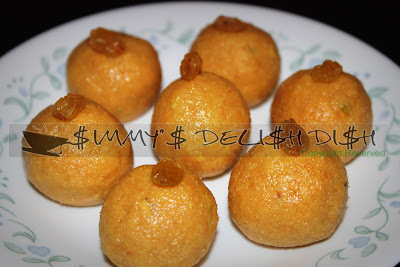 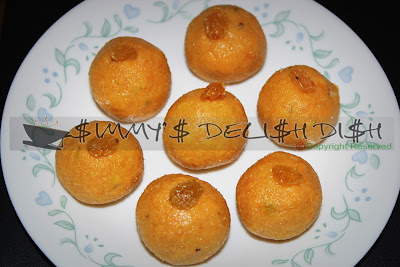 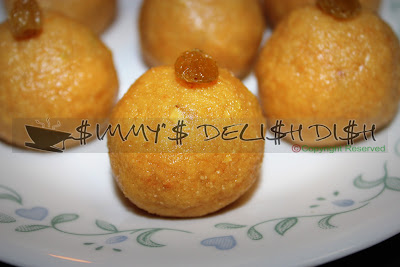 1-In a apn mix gram flour,semolina and melted ghee or butter.
2-Roast the above mixture on medium heat until light golden brown in color or until you smell the roasted flour.
3-Keep stirring the mixture so that it does not burn.This will take about 8-10 minutes depending upon the heat.
4-Remove the pan from the heat and let the mixture cool down a bit but still warm to touch.
5-To this warm mixture,add sugar,chopped nuts and cardamom seeds.
6-To make ladoos,take a spoonful of mixture in your hand about the size of a lemon and roll in between your palms to form a smooth and round balls.
7-Keep the ladoos on a plate and garnish with raisins on top which will stick to ladoos.
8-Cool down the ladoos and serve.This can also be stored in air-tight container for 2-3 weeks. 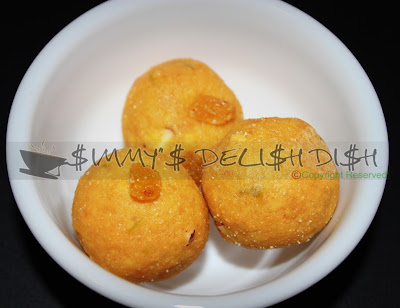