- May 13, 2013
Chhena kheeri is a sweet dish originally from coastal Orissa in eastern India.Chhena kheeri is made by deep frying chhena(homemade paneer). Although typically ghee, traditional clarified butter, is used as the frying medium, chefs frequently substitute this with vegetable oil. The paneer/chhena are added to milk and sugar, and boiled further until some of the milk evaporates and the dish acquires a thicker consistency, to form a rabdi. The mixture is seasoned with cardamoms and nuts before being served.It is one of my favorite dessert.So let's start cooking.... 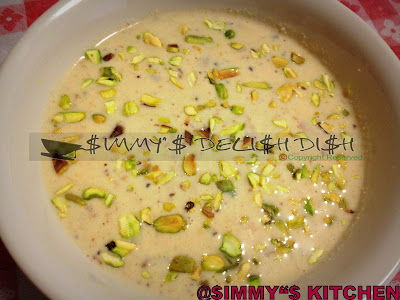 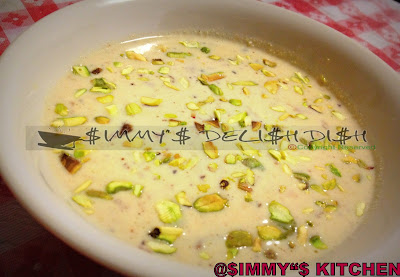 1-In a saucepan boil 1/2 ltr of milk over medium flame,when it comes to boil,add  lemon juice and mix slowly.
2-When the paneer/chenna (solid portion of the milk) clearly separates from the whey(paneer water),Drain the liquid.pour cold water over it and squeeze well.Allow the chenna to cool.
3-In a pan heat a tbsp of ghee.Fry cashew nuts till golden brown.Remove from pan and keep aside.Reserve ghee in pan.
4-Reheat ghee in the same pan add little sugar and fry till sugar turns light brown(caramelize),then add the chenna.Stir fry the chenna till it turns to a light golden brown.Keep aside.
5-Heat a heavy bottom pan.Add 1 ltr milk and bring to a boil dissolves..Constantly stirring at regular intervals till the mixture becomes thick or reduced to half its quantity.
6-Add the fried chenna and keep stirring for another 8-10 minutes.
7-Add sugar,powdered cardamom,condensed milk and fried cashews.Mix well and remove from the heat after 2 mins.
8-Garnish with chopped pistachios and refrigerate it for 1 hour.Serve chill and enjoy.
(Instead of using homemade paneer you can also use ricotta cheese) 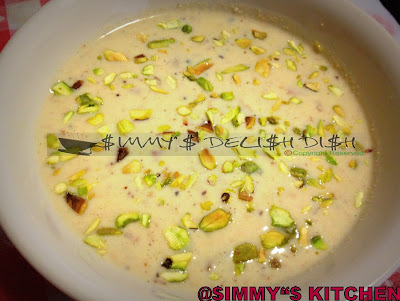